Giveaway: Win a Pair of Tickets to See Sango & Savon in NOLA 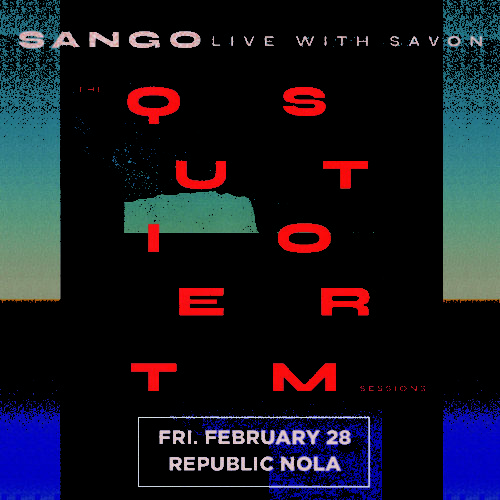 Once the Mardi Gras madness is over, the city of New Orleans pretty much goes back to normal. But before we close out Mardi Gras week, DJ and Producer, Sango, will be performing alongside fellow DJ/Producer, Savon, live at Republic NOLA on Friday, Feb. 28.

Sango jumpstarted his career in 2010, but has been making beats since he was a young boy. He’s most notably known for his remixes of famed stars, Aaliyah, Drake, Little Dragon, Nas, and The Weeknd. He’s also produced songs for Tinashe, Christina Aguilera, Bryson Tiller, Bas, Goldlink, Frank Ocean, and Wale.

The Seattle-born producer will be stopping in New Orleans during is Quiet Storm Sessions tour before heading to Dallas, Austin, and Phoenix over the next few days. Tickets are on sale now, but we are giving yu a chance to slide in for FREE! For a chance to win a pair of tickets to the concert, fully enter out your info HERE.

The giveaway ends on Friday, February 28 @ 12 p.m. CST. One (1) winner will be chosen at random and notified via email. Good luck! And if you’re not feeling lucky, purchase tickets!

Win a Ticket to The Actor’s Seminar Featuring...